How to Service and Clean a Singer 66... bobbin case and postion bracket

I know the Singer 66/99/185 pretty well by now.  I find it very satisfying to clean and oil these machines because they make the nicest straight stitch.  Rosie came home with me from Cicero, NY.  She belonged in Nancy's family but it was time for her to move on so she came home to me.  I love this model 66.  Probably because I, too, am a red head (still, can you believe THAT?)

﻿
﻿ I recommend making sure that you have good tools when you work on old sewing machines.  I used common screw drivers when I first started.  Finally this summer I bought a set of Chapman hollow ground screw driver bits.  I also bought some bits from Brownell’s.  Since I have at least ten if not more sewing machines to fix up I figured it was time.  I am glad that I did.  What a difference.  Check out  N. Rain Noe's blog  http://vssmb.blogspot.com/  for more information about screw driver bits.

When removing a screw it is so important not to bugger up the head. You need these screws again.  Singer screws have unique threads so just any old screw will not do.  The best way is to apply downward pressure toward the screw hole  FIRMLY as you turn your driver.   If it doesn’t go readily, don’t force it.  Chapman bits will break before they break the head off of the screw.  Brownell bits won’t.  If you cannot get the screw loose with firm pressure and firm turning, wait.  Apply more solvent and try later.  PATIENCE IS A VIRTUE 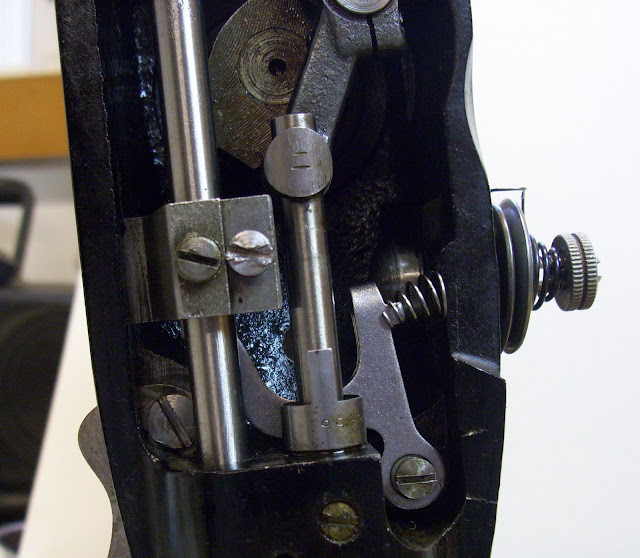 I will take responsibility for that nasty looking screw.  But not for all of it.  It started out looking a bit sorry, that should have been a clue.

When I take apart a machine for cleaning I like to have several different containers to keep parts organized.    That way I can keep the corresponding screws with each part.  I use old yogurt containers for larger parts and ice cube trays for small, tiny parts.  I also like to have  containers for the cleaned parts.   I have been baffled when a screw doesn’t fit even though it looks like it should.  So now I keep all the screws a pieces together.  I also like to put screws BACK in their homes on the machine to decrease the chance that I will lose them.  Of course, it helps to remember that I have done this.  Last week I spent a lot of time looking for a screw which was right where it belonged.

I recommend working in a well ventilated area.  Some of the solvents are stinky.

Loosen the motor mount  screw and lift the motor upward to loosen the belt.  This will enable you to remove the belt and the handwheel  aka balance wheel.

Remove the motor mount screw and remove the motor. I put the screw right back into the machine, then I know right where it is and I won't lose it or confuse it with another screw.


If your light and motor are attached to each other, you will need to remove the light from the machine as well.  Rosie did not have a light.

Place all of these parts where you can find them later.  This is where a tidy workspace helps.

Remove the bobbin winder.  It is easy to do .   Remove the screw that attaches the bobbin winder to the handwheel shaft ( I might be making up names, here.)  At least I did not call it a whatchmacallit)
This photo is not Rosie, it is of Syracuse Gramma.  Same idea, different machine

I have already removed the slide plate in the photo below.  To remove the slide plate, slide it out a little ways and then as you gently lift it, slide it BACK toward the feed dogs. This will release it from the spring, seen at the bottom of the photo below.
To remove the needle plate simply remove  the screws.  I have a ratchet that loads at a 90 degree angle which allows me to access these screws fairly easily.  The back one is a bit tricky.    You can bugger that one up with a common, long handle driver because it can only take the screw at an angle.  BEWARE  of that.

Now I  oil each oil port and every place that there is metal touching metal.  I turn the machine on its side to oil all those underneath connections and  I oil each oil port on the top of the machine as well.  I oil the parts through the back hole too.    I like to use Liquid Wrench if the machine is particularly dirty and old.    It stinks but it does the job.  I suppose kerosene could do the same but that really stinks.  I have tried kerosene because I have read so much about its virtues.  I am not a fan.

I also dabble LW on each screw that I  can see.  Today I had the brilliant, if I say so myself, idea of putting some LW in a long spout oiler.  That enables me to be more precise and less wasteful, a feeble attempt at being GREEN as I recondition these old machines.

Now that the needle plate has been removed and the machine has had a drink, it is time to remove the feed dogs.  Turn the machine on its side and locate the screw that holds the feed dogs in place 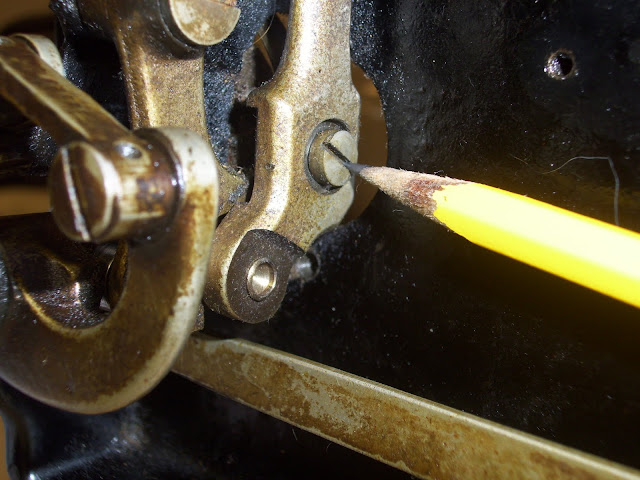 I find that my angled ratchet works the best.  Be sure that you select the correct bit size for the screw to be able to apply as much torque as possible and reduce slippage which will strip the head, aka bugger it up.  Remove this screw and remove the feed dogs.  The feed dogs should lift right out if there isn't too much grit and lint holding them tight.  If they don’t lift right out, jostle and jiggle and gently try to pry them up and out.   They usually  drop down or fall out.

The bobbin case should then lift right out.  Sometimes it doesn't but it should.  There is nothing but 80 to 90 years of lint and oil and dirt holding it in place.  So jiggle and jostle and work it up and out of there with no fear.  But don't force it.  It will come, I promise. 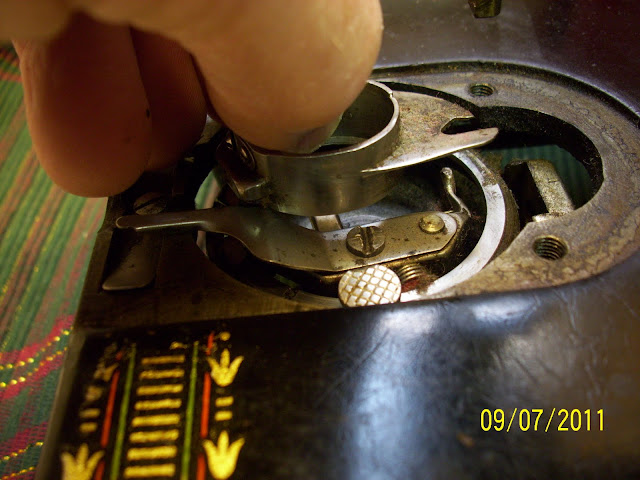 Turn the machine on its side so that you can see just underneath the hook.  The pencil points to a set screw.  Loosen this (or in this case I removed it so that I could clean it) This will release the bobbin case assembly so that it, too can be removed.

Sometimes you have to move the assembly back and forth to loosen it.  Or sometimes, as in this case, a gentle tap from below will free it up. 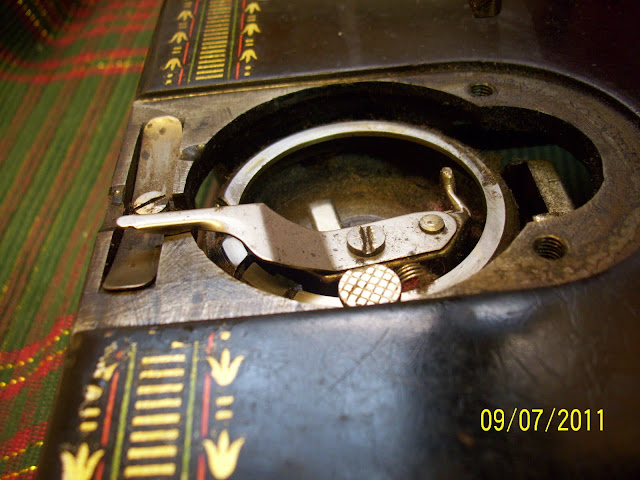 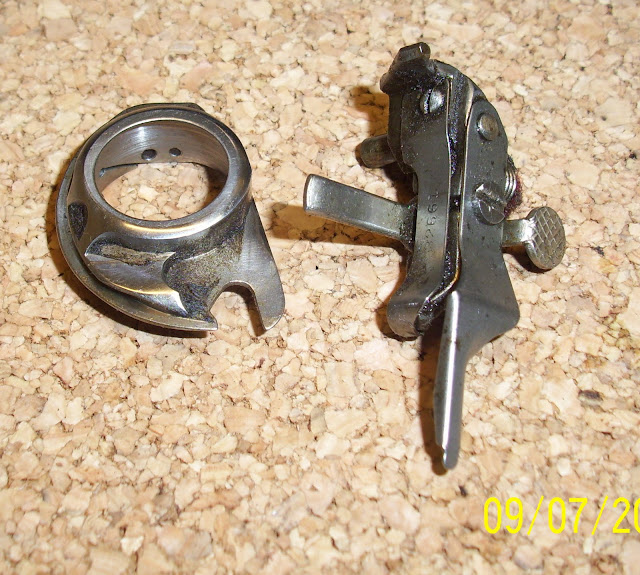 Can you believe that this machine was stitching?  Clear testimony to the fine engineering of early Singer sewing machines.

It is raining again and I am about to lose internet.  The satellite always goes down in heavy rain.  We have had flooding here today and could have more.  Our road was closed going south and going north.  The water receded some during the respite, but it can go up again.


Next time: Removing the presser bar and the buggered up screw story.
Posted by Elizabeth at 10:15 PM