I have been in therapy with my various sewing machines. It seems that I prefer my 201-1. The others are coming to grips with my favoritism. We all acknowledge that I love them all, but, truly one gets most of my attention.  As machines, this doesn't seem to make much difference in how they respond to me. For that, I am grateful.

This One Block Wonder was pieced on my 201-1. I did stitch the blocks together with the 201-2. I needed both hands to match the points. I sent this off to Canada to a friend who fell in love with the fabric when she visited last spring. Seriously, she walked around the Sewing Space (which may be re-named soon) hugging the fabric. As I was working on the quilt, all I could think of was Margie and how much she loved that fabric.

There was not enough color in this quilt for me. So, I bought another piece of fabric and went at it again with the triangles and hexagons. 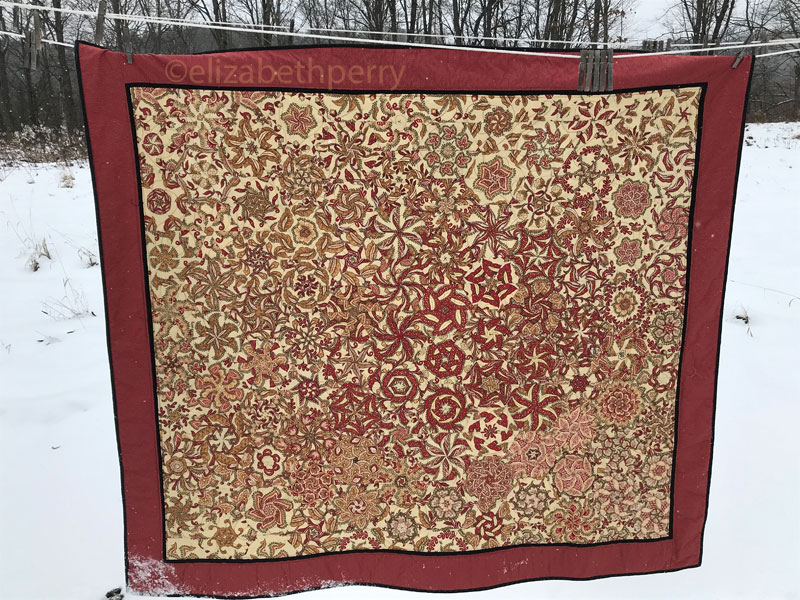 This was the result. The problem with this fabric; the repeat was 12 inches rather than 24.  Still, it's finished and finished is better than perfect. Theo doesn't really care. He's just happy to be outside. 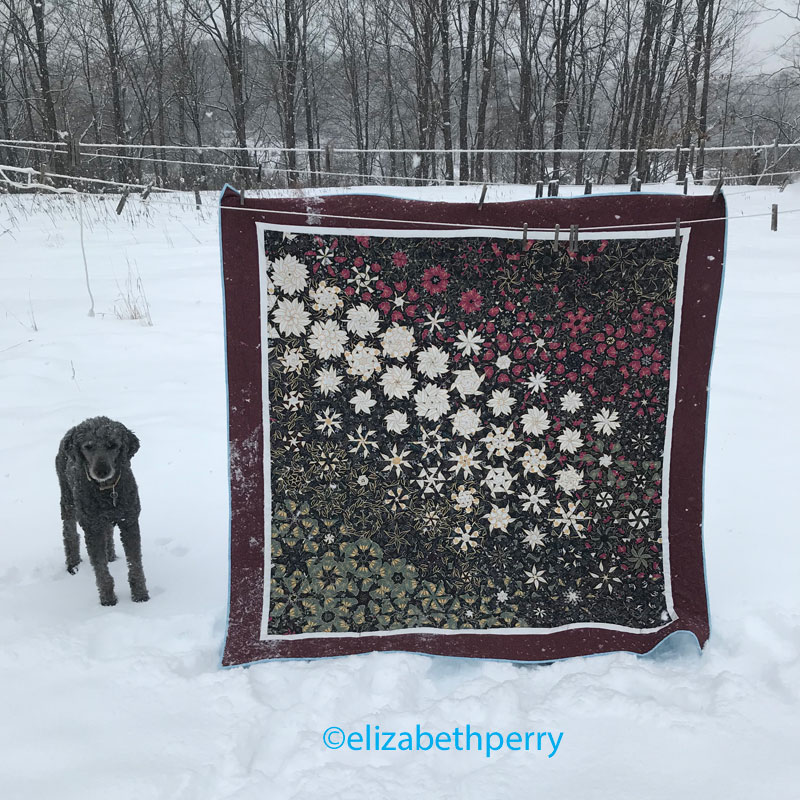 This is the original fabric. There is A LOT of white. 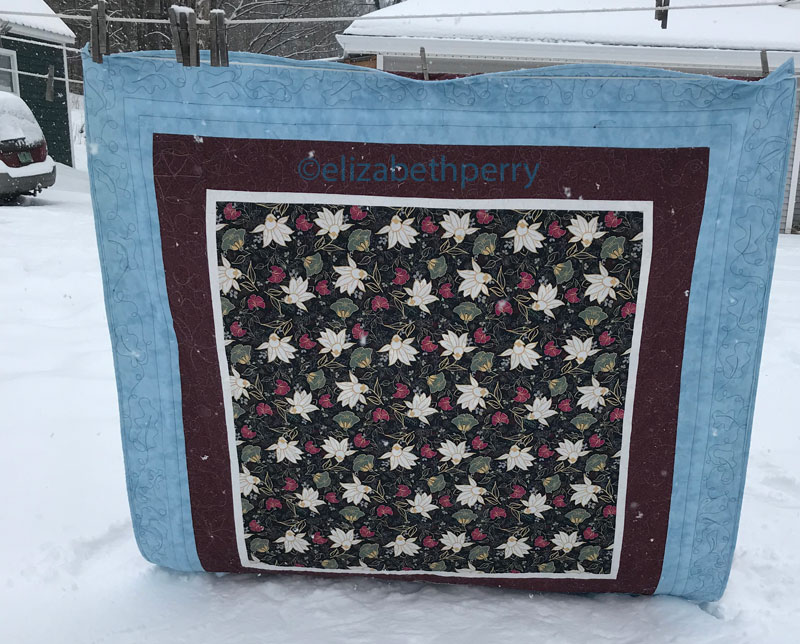 Compare it to  Margie's quilt. These colors are more subtle and the repeat is much larger. 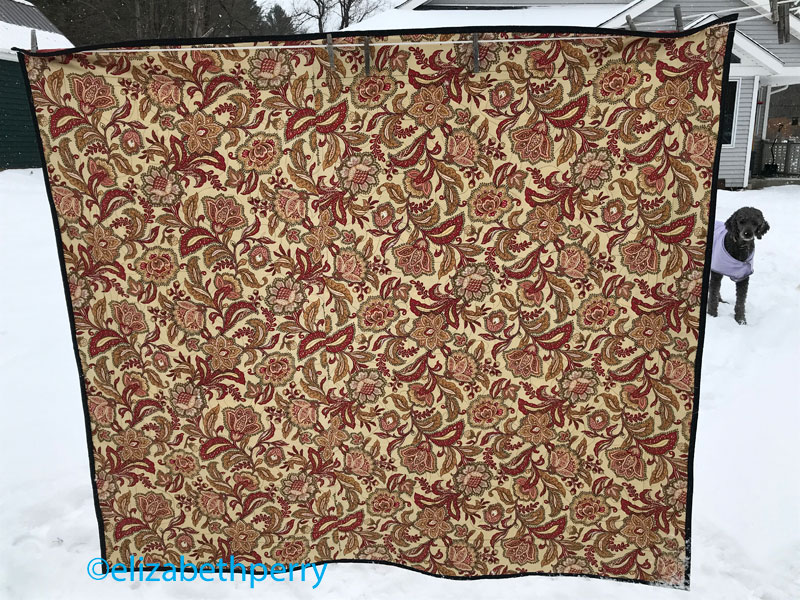 Because I wanted more color I bought this piece at Stowe Fabric and Yarn. Lots of color and a 24 inch repeat. After this, I think I will move on to something else.

Posted by Elizabeth at 1:26 PM No comments: Links to this post

Email ThisBlogThis!Share to TwitterShare to FacebookShare to Pinterest
Labels: One Block Wonder

I started this scrappy quilt a couple of years ago.  Perhaps even as long ago as 2016. I remember finishing the piecing during my chemotherapy drama. S. would come over and we would sew. I put it on the frame a couple of weeks ago and had intended to practice some swirls.

I just couldn't get the rhythm of that design.

I could draw it.

I simply could not quilt it.

Ten times I tried. I ripped out ten swirls. I was not feeling the joy.

So I gave up and went with feathers.

And pebbles with wavy lines along the seams.

I alway ran the Nolting without the stitch regulator. After I finished the ruler work on Ellen's quilt I decided I needed more practice in stitch regulated mode. 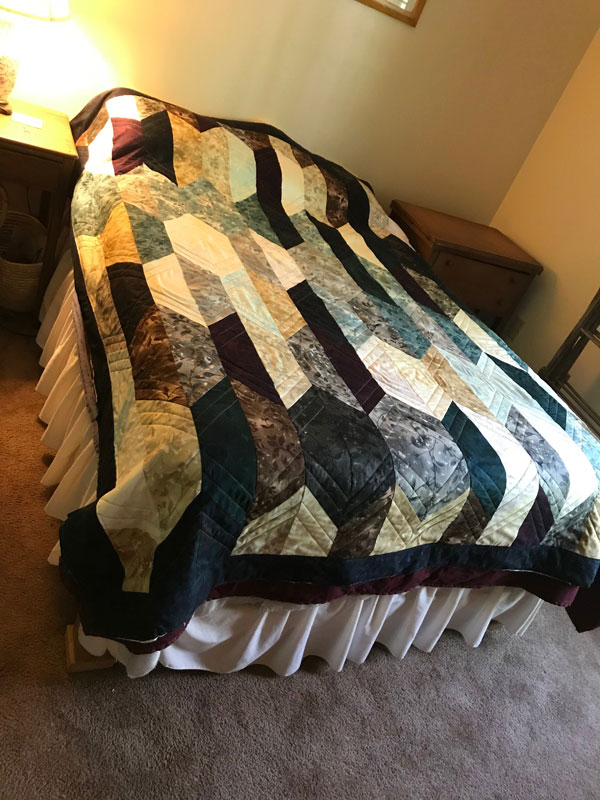 Next up is the UVM quilt.

This hangs in the atrium at UVM Medical Center. It is a steel sculpture.

I made this for my friend, J., who sent me the photo in February of 2018. I was not yet living in the 802. I found much of the fabric in The Quilt Zoo, next door to my abode of the time. The rest I hunted down on line. Finally I was satisfied with the blend. I wish I knew how to quilt it.

So. I had occasion to need the walking foot to bind that scrappy quilt. The foot is a Viking and didn't fit on the Necchi. It fits beautifully on the Singer 237. I love the Necchi but it is handy to have a machine that will zig zag and accepts the walking foot. Sigh. I should consider off loading a few machines.

I suppose I could start with the 15-90. It is a nice treadle but NOISY. True, it is strong, but I think the Necchi is just as strong. I could test them against each other. Maybe make a leather something or other.  Good idea. Be kind. Be just. Just be kind.

Posted by Elizabeth at 8:52 PM No comments: Links to this post

All of Vermont has one area code. I imagine Wyoming is like that, too. Oh, North and South Dakota, Montana, and Rhode Island keep company with Vermont and Wyoming. I never knew. Nor did I care. Now that I live in the 802, we Vermonters refer to our state thusly, I am rather proud of it. "It" being one area code for the whole state. There is a twitter hashtag for it, I believe. I only troll on twitter. Off and on. That shit just depresses me.

I love Vermont. "Way up by Canada," Ingrid declares every time I call her.  She seems to think I am in some foreign country. So much so, that she thought I was too far away to manage her affairs, as if geography has anything to do with paying bills on line.  My paternal grandmother was an eighth or ninth generation Vermonter. My father was born in Vermont. My grandfather, from Western Mass, had the typical Vermont sense of humor. "Have you lived here all your life?" someone once asked him. "Not yet." he dead panned. (Is that even a verb, Benjamin Dreyer?) I identify as a Vermonter. So I believe I belong here.

So what does this have to do with sewing machines? Absolutely nothing. I painted the fence all day, after digging up sod around fourteen pickets. The black flies were merciful and I am almost halfway done. Now I am enjoying a Lake Hopper Hard Cider of Citizen Cider fame and 6.2% ABV. I haven't eaten in six hours. So I'm a bit tipsy and talkative.

This morning I put on my painting pants and my Bernie 2016 tee shirt. OK. I slept in the shirt. (No, I am not a Bernie fan this time around. It is time for a female president) The Weather Channel predicted rain, high of 74. I don't think that the WC understands mountain weather. It was down right chilly when I set out to prep the fence for painting. I changed into a merino wool shirt, underneath a flannel shirt with a bright, red fleece on top. By 11 I had peeled off the fleece and flannel (damn, I am alliterative today, yes?) and changed into my Insect-o-shield tee. The sun was out and I was ready to PAINT. 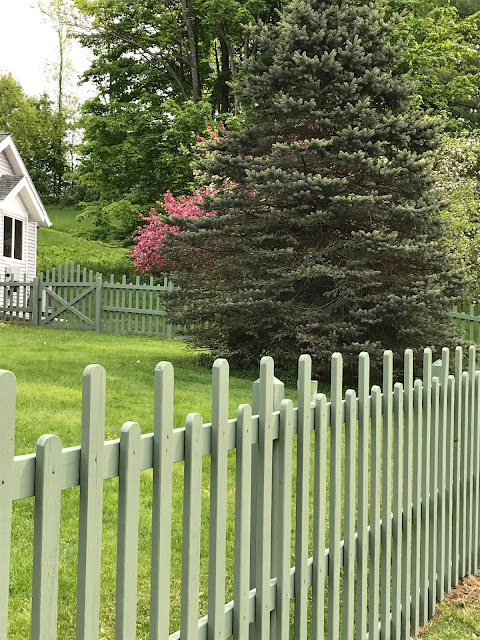 This fence has 38 sections of fourteen pickets each. We built it last year. Pressure treated lumber needs a year to dry out. It was hot and dry enough last year that I could have painted it (actually we are using a solid stain) last fall. I didn't

Want to get back to sewing machines? OK. I finally set up the Nolting 20 CLX in March. I put a practice sandwich on the frame and discovered that I could still quilt. I finished two UFOS and I even quilted a full sized quilt for a complete stranger. Mom was not supportive. She thought it was a bad idea. I agree. I doubt I could quilt for a money. I think it would take the love out of it.

I met J. in the late summer of 2017 on one of my trips while Steven and I  were in transition between NY and the 802.  In February of 2018 she had occasion to visit UVM Medical Center. There she saw this steel sculpture entitled "The Fabric of Life."  She texted me the photo and I set out to find fabrics to make a quilt. 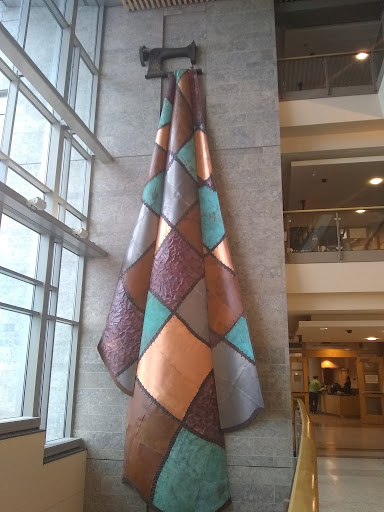 It took me until this past February to find the perfect collection. Now, I dd not search that whole time. It's just that the fabrics all came together this year. 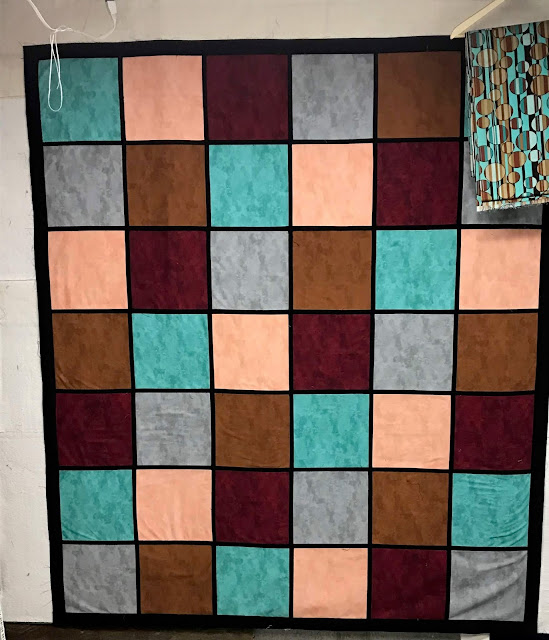 I found the backing fabric (on hanger, upper right corner of photo) in my stash. I'm pleased as punch.
Posted by Elizabeth at 6:56 PM 2 comments: Links to this post

The temperatures have been sub-zero in Vermont this winter. Our house in New York was one hundred years old. The windows were original, double hung, single pane with leaded glass on the top. I loved them. They were elegant and drafty.

I made roman shades for them with Warm Window insulating fabric. We left the shades behind when we moved. That was likely a mistake. I never saw that the new owners hung them back up after we moved out. Too bad. I could have used that fabric.

Window technology changed between 1920 and 1990.  True, the casement windows in our Vermont house are double pane but the seal is gone. The weatherstripping has failed as well. So I did here what I did in New York. I made roman shades for the windows.

I made three long narrow ones for the atrium door that leads to our deck.

I've got a clouds and bird theme going on. This fabric reminded me a bit of fall. So I decided the next curtain would be winter.  Today I almost finished it. Blue sky with cardinals on snowy tree branches

I can tell that I will have to press out the top seam. It pulls a bit. Must be that the bottom tension was a bit tight.

This curtain/shade is 74 inches wide by 70 inches high. Since it will draw up as a shade, I used the Super Nova Necchi zig zag setting to stitch 63 carbone rings onto the back side of the shade. It took all afternoon.

The fabric slid under the presser foot of the BU as I was sewing this line of rings. In this picture it looks as if I am sewing with both machines.  Not so.

For some reason, Theo was desperate to get either behind me or underneath the machine this afternoon. I don't know why.  No, I don't think it was because I was mourning my sister and worried about my mother. Though maybe. He got over it pretty quickly when I offered him a cookie. More than likely he was upset by Steven stomping around upstairs.

Alice died April 7, 2018.  I was supposed to go out to help with her SCT right after I retired. The last few weeks of work I was channeling my inner urbanite so that, somehow, I could tolerate the city. I had it all planned out. We would spend the spring and summer together in the windy city as she recovered. Then, after the requisite 100 days, we would come here and I would continue to help her get well. We would laugh and play with the pups. We would ride our bikes on the rail trail, take walks in the woods, paddle on the reservoir, and, maybe, even hike in the mountains a bit. We would go see Mom.

Instead, I packed up all her stuff, sold her dwelling and brought her dog home. I won't ever get over it. Some days I feel as if she just died. The grief is sudden, deep, and awful. Then other days, like today, I could almost claim contentment.  The promise of spring, and sewing help. Steven helps. The grandbabies and their parents help. The dogs help. My friends help. Looking at the mountains helps.   It wasn't supposed to be this way. But now it is.

Posted by Elizabeth at 9:54 PM 12 comments: Links to this post

Posted by Elizabeth at 6:17 PM 5 comments: Links to this post

Posted by Elizabeth at 5:55 PM 16 comments: Links to this post

It started out as a gorgeous, but frigid day.

Ryan could work. I don't know how comfortable he was. He is, however, hardy and strong. We are grateful

I wish I had been present for this. I would have put a pair of red pumps under that chimney.

Posted by Elizabeth at 5:32 PM 5 comments: Links to this post